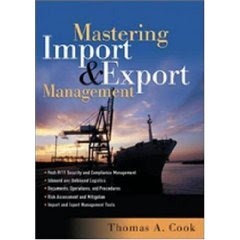 The last two years have seen drastic changes in the import/export arena, due to a combination of world developments, economic changes, and technological advances. Mastering Import and Export Management is a definitive resource for keeping up to date with the latest laws, regulations, and opportunities in international trade. This invaluable, authoritative volume offers complete, timely, and practical hands-on information on:

This is the third edition of a book formerly published by Lloyds of London Press under the title International Commercial Disputes. It is concerned with how commercial disputes which have connections with more than one country are dealt with by the English courts. Much of the law which provides the framework for the resolution of such disputes is derived from international instruments, as a consequence of which English law is very similar to or the same as the law of other countries in and beyond.